On December 7, the Joint Baltic American National Committee, (JBANC), representing central organizations of Americans of Estonian, Latvian, and Lithuanian heritage, and the embassies of the Estonia, Latvia, and Lithuania, hosted a House Baltic Caucus (HBC) reception, celebrating the 20th anniversary of the HBC and honoring the newest members of the caucus. 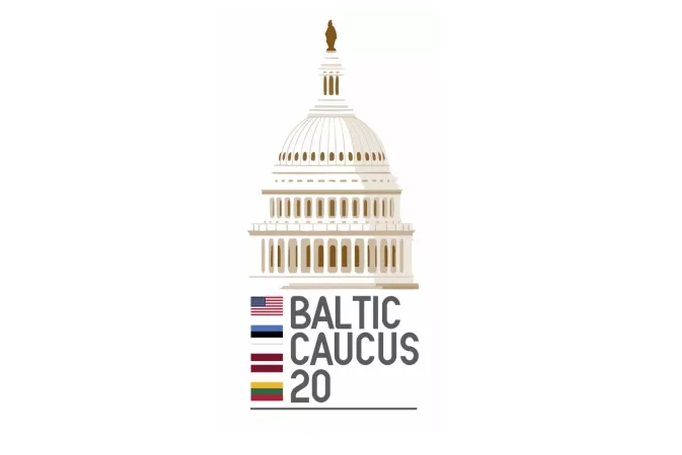 Today, there are 74 members of the HBC, and this year 22 new members have joined. “That marks the biggest increase in membership in at least 15 years, and shows a very productive year in outreach and contacts between the U.S. Congress and the Baltics and our communities in the United States,” said JBANC managing director Karl Altau, who urged more Members of Congress to follow this example.

Mr. Altau gave the opening remarks, where he spoke about the long history of the relationship between the U.S. and the Baltic countries, and stressed the importance and significance of having the HBC. He thanked both Representatives John Shimkus (R-IL) and Adam Schiff (D-CA) for their leadership of the HBC.

Remarks were also given by parliament representatives from Estonia, Latvia, and Lithuania.

Mr. Marko Mihkelson, Chairman of the Foreign Affairs Committee of the Parliament of Estonia, remarked “I specifically want to thank the House Baltic Caucus during our time joining NATO.” He noted the importance of including Estonia in the visa waiver program. “It’s imperative to have such strong voices in Congress advocating for the Baltic countries,” he added.

At the reception Mrs. Solvita Āboltiņa, Chairwoman of the National Security Committee of the Parliament of Latvia, said “this is a celebration of a great friendship, commitment, of dedication to common values.” She noted that Congress has been a great supporter of all three Baltic states. “Baltic flags were present at the Department of State during Soviet times,” and that it mattered.

In his remarks, Emanuelis Zingeris, Chairman of the United States Caucus of the Lithuanian Parliament, thanked the members of HBC and all the friends of Baltic countries. Mr. Zingeris stressed the importance of having great diplomats, both from Lithuania and the U.S., advocating for the Baltics. He also added that the relationship between countries “is flourishing.”

The celebration of 20th anniversary was also attended by various representatives from Congress. The co-chair of the HBC Rep. John Shimkus thanked the Baltic communities for “remembering and cherishing ancestry, and lobbying in Congress, engaging in democratic movements.”

Rep. Andy Barr (R-KY), who joined the HBC in 2016, pointed out to the importance of spending more on defense in the Baltics and thanked Estonia, Latvia, and Lithuania for fulfilling their commitment to achieve 2% of GDP spending on defense. Mr. Barr also acknowledged the threat of Russia’s aggression in the region and the importance of “watching the energy industry and its independence from Russia.”

Republican Rep. Doug Lamborn of Colorado acknowledged the “warm, friendly and hospitable people of the Baltic countries” and congratulated everyone on the anniversary.

Valdis Pavlovskis, President of the Baltic American Freedom League (BAFL), closed the formal part by adding that “Baltic organizations, including JBANC and BAFL, have put much effort into advocating for the Baltics.

“The 20th anniversary of the House Baltic Caucus is a good reason to say very warm thanks to Rep. Shimkus, Rep. Schiff for their strong leadership and all members for great Baltic team spirit,” said Andris Teikmanis, the ambassador from Latvia to the United States.

About 100 people attended the reception, which was held in the Gold Room of the Rayburn House Office Building.